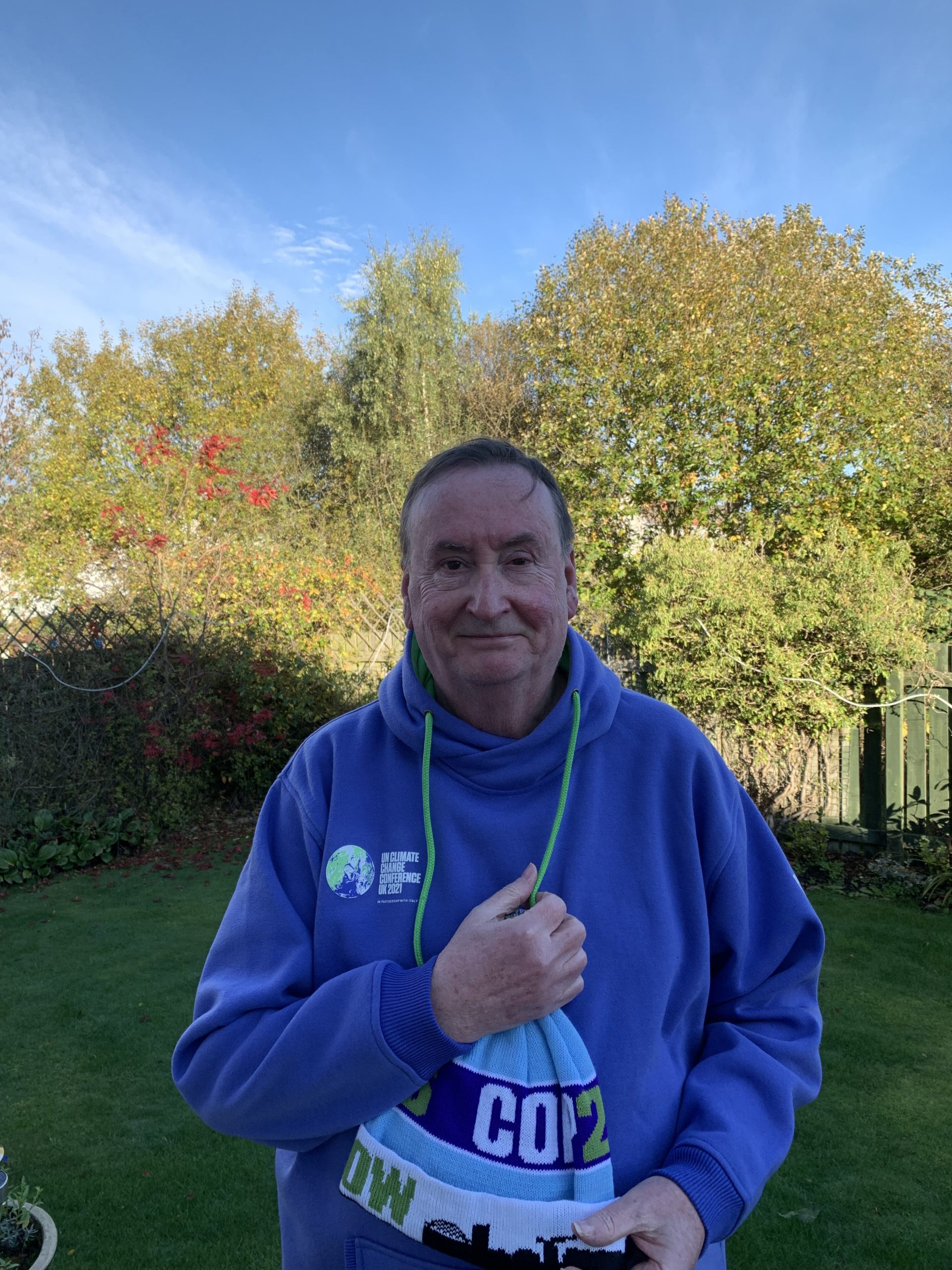 Volunteering at COP26 – being part of something big

I felt immensely excited and proud to be one of the 1,000 volunteers helping at COP26 in my home city of Glasgow. Volunteers came from different corners of the globe, to perform a range of tasks. I was a shuttle hub volunteer which means I helped those going to COP26 get from there and back by bus shuttle from the key transport hubs – over 7,000 people on one day in the hours I was there.

What gets me out of bed in the morning is feeling like being part of a greater whole. COP26 makes me realise that climate change and net zero is the bigger picture. As VIPs with their outriders whizzed by me, I was focussed on people keen to get their day going, like the lady who travelled for days from the islands of Palau or the man from Samoa to make sure they get their voices heard alongside the more well-known world leaders. The Volunteers logged the peoples from different parts of the world that they’ve welcomed to Glasgow – now covering almost all the 196 nations at COP26.

Glaswegians had varied responses to COP26. Most saw it as a great opportunity for the world. Some reflected the views of Greta Thunberg, that it’s more about “blah blah blah” than substance. Some bemoaned the inconvenience to their daily routine, although Glaswegians are renowned for their humour and make a joke of any temporary disruption to their day.

Coming from a mining family, I started my career in the coal industry, and was enormously proud to work in a nationalised industry. A phrase I heard a lot back then was that Britain was an island founded on coal surrounded by fish.

I was one of 20 young graduates that joined the National Coal Board (NCB) in 1979 and many, like me, came from coalfield communities. Early in 1980, I was sent on behalf of the NCB’s Economics Intelligence Unit, to monitor the Select Committee on Energy at the House of Commons to feed back on its inquiry into alternative sources of energy. I reported back that I didn’t see renewables taking off or being any competition to coal. I was deeply attached to coal as a nationalised resource. The prevailing economic thinking at the time was the mixed economy – nationalised industries, public corporations and private enterprise.

I so wish now that I could have heard statistics about the threat to the planet (those statistics came much later) and the imperative of reducing our dependency on fossil fuels and ramping up clean alternatives. At that time in the early 1980s the environmental problem of burning 120m tonnes of coal in the UK was making coal a little cleaner. I was astonished to learn that more coal is produced in the world today (~7.6 billion tonnes) than early 1980 (~3.8 billion tonnes), according to statistics from the International Energy Agency.

Climate change statistics are important, but change will rely on leadership

During these weeks at COP26, I saw and heard the leaders and politicians on the TV radio and through the media. As I spoke with those going to COP26, I heard their hopes and fears. I realised that climate change is more than the science; political leadership is crucial. Leaders need to be skilled in the appropriate use of data as part of their role in persuading the public to make the behavioural changes and embrace the consequences. E M Forster said “Only Connect!…Only connect the prose and the passion and both will be exalted”.  Leaders connect the prose and the passion and need to skilfully deploy the statistics. Leaders can give statistics a social life.

As we’ve learned from the Covid-19 pandemic, the role of senior leaders in government is also vital in providing support to statisticians. The lessons learned throughout the pandemic should show us how to better help people to understand the choices open to us all to respond to the challenges of net zero.

Statistics play a key role in helping the public understand the bigger picture on climate change. They are also essential for helping governments design and monitor policies that reduce or prevent greenhouse gas emissions (mitigation) and prepare us for the expected impacts of climate change (adaptation). Because it’s such a complex topic, climate change statistics add insight when related sets of statistics are brought together to tell a clear story of what is happening and why. They also add value when they are presented in ways that help different types of users understand what the data is telling us, and when users can access the information they need. Our recent review of the UK’s climate change statistics looked at exactly these two things: their coherence and accessibility.

I’m nostalgic for people in Britain as a society having a concept of being part of a greater whole, that realises we’re dependent on each other. We need to connect with each other locally and globally and we’ll appreciate being part of something much bigger than ourselves.