This case example illustrates basic and enhanced quality assurance of a mix of administrative data sources used to derive the Department for Communities and Local Government’s Indices of Deprivation, which include police recorded crime.

Outline of the Indices of Deprivation quality assurance approach

DCLG explains its approach in Chapter 5 of the Indices of Deprivation 2015 Technical Report.

The English Indices of Deprivation (IoD) are an important tool for identifying the most disadvantaged areas and for supporting decisions about addressing local needs. They are widely used by central and local government and community organisations to target their services. The Indices also provide a rich dataset that supports further analyses of different aspects of deprivation, providing greater insight into the nature of disadvantage for all users, whether in academia, the voluntary sector, business or the general public.

[From DCLG’s Infographic: The Indices of Multiple Deprivation 2015]

DCLG publishes the English Indices of Deprivation; they include the Index of Multiple Deprivation (IMD). The Indices are an area-based measure of relative deprivation, designed to identify the extent of deprivation within small areas in England. The Indices are comprised of a range of separate indicators, grouped into seven distinct domains: Income, Employment, Education, Skills and Training, Health and Disability, Crime, Barriers to Housing and Services, Living Environment. Each Index represents a different aspect of deprivation.

The Indices compare local areas in England in terms of their individual deprivation by ranking each Lower-layer Super Output Area (LSOA). As each of the seven domains has its own scores and ranks, users can compare the deprivation ranks between different local areas, for each separate domain. The domains are combined in the overall Index of Multiple Deprivation (IMD). IMD allows users to identify the most and least deprived local areas in England, and to rank them. 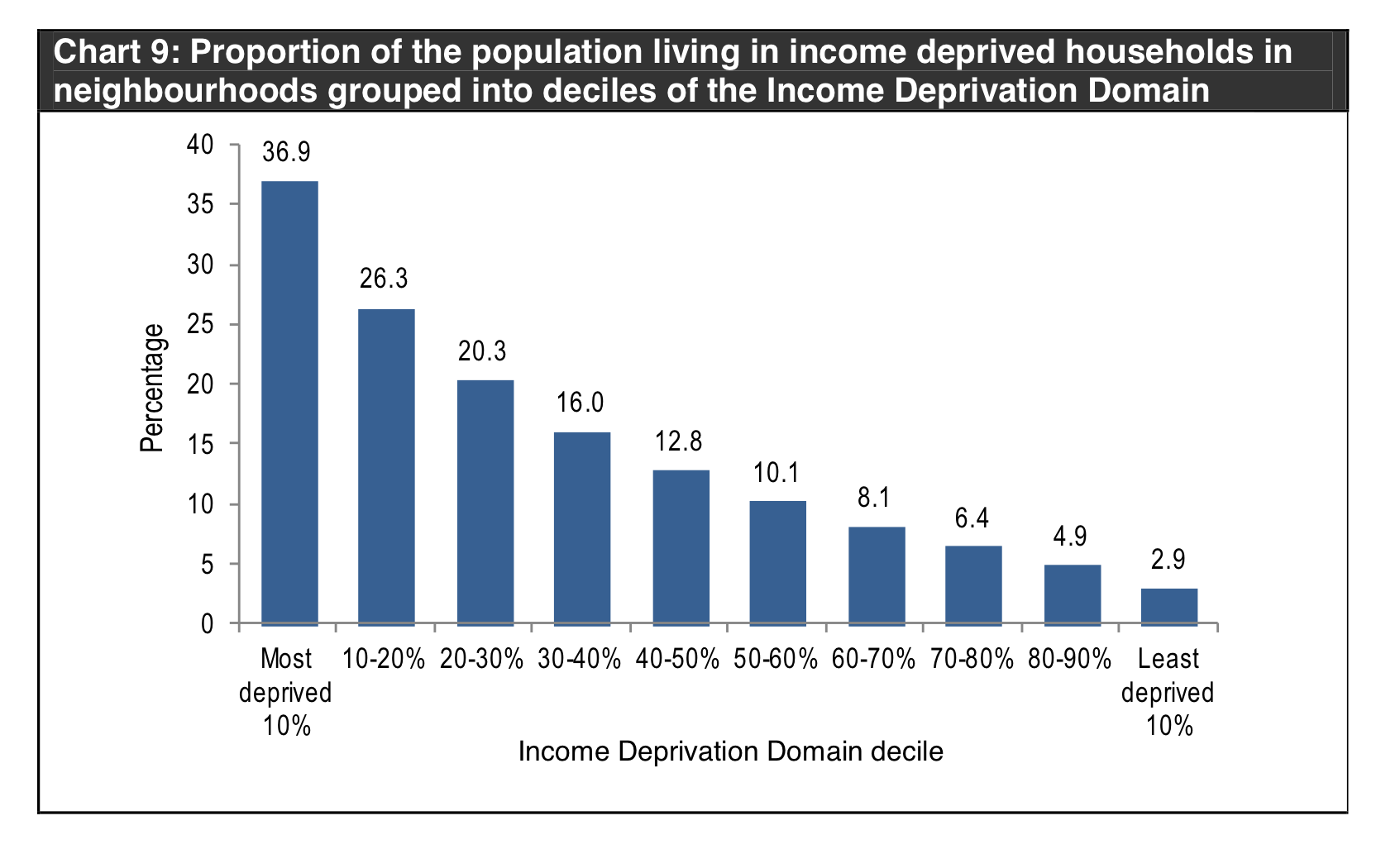 [From DCLG’s statistical release: The English Indices of Deprivation 2015 p20]

The Indices are compiled using administrative sources wherever possible. For example, the income domain includes benefit data from the Department for Work and Pensions, tax credit data from HM Revenue and Customs, and asylum seekers data from the Home Office. For some indicators census data need to be used – for example, DCLG used 2011 Census data for IoD 2015 for the adult skills measure of the proportion of the working age population with no or low qualifications and the proportion who cannot speak English well. The IoD team in OCSI obtained event-level police recorded crime data for 2015 from police.uk. 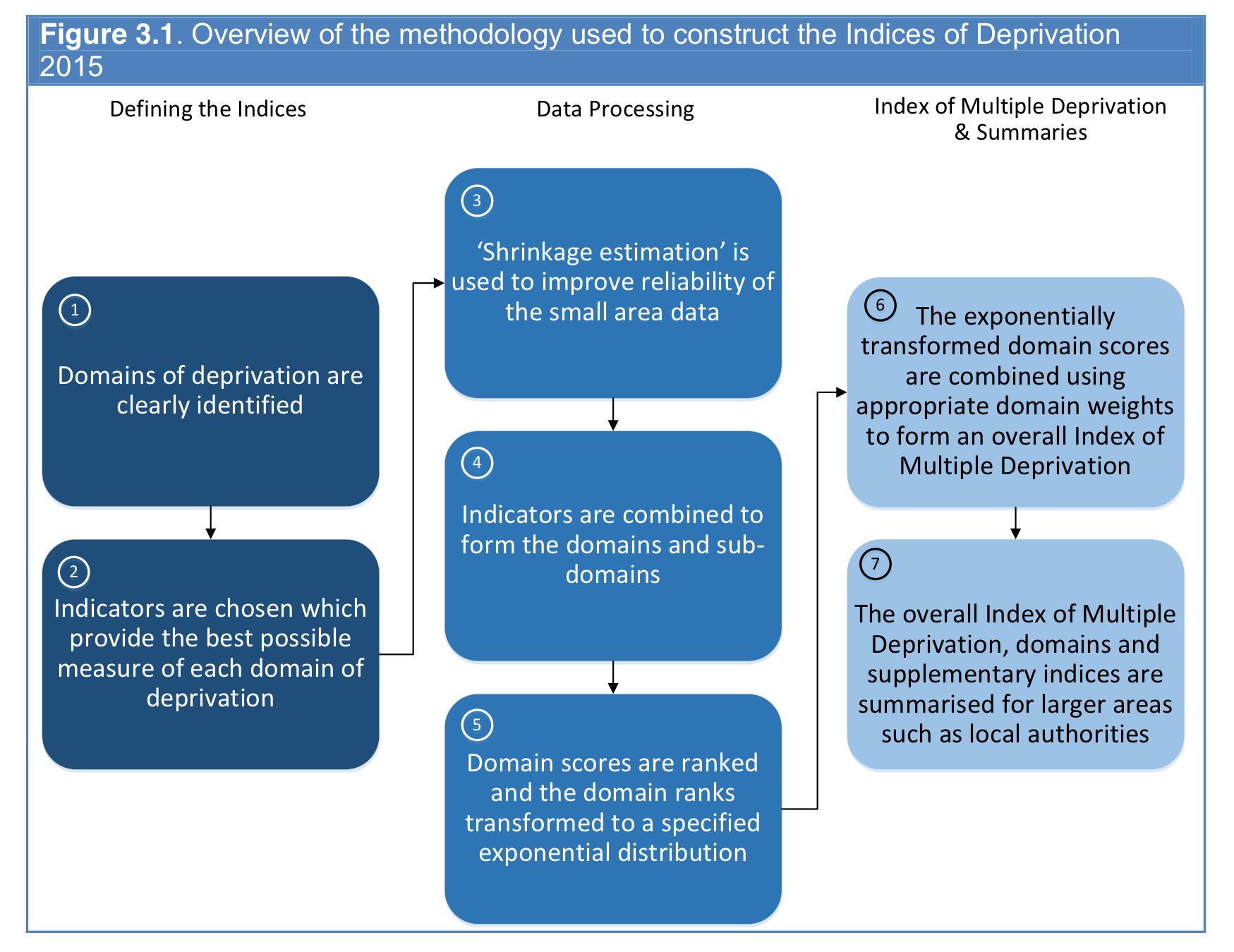 OCSI described its approach to quality assurance in Chapter 5 of the Technical Report. It used the Authority’s guidance to decide on the level of assurance for each data source:

Based on our assessment of the Indices inputs and outputs, we have determined the level of assurance required to be as follows:

It provided clear instructions to its sub-contractors on the information required about the source administrative data – check out the slide presentation shared among the production team (see Appendix K of the Technical Report).

OCSI set out its criteria for the decision about the data quality risks for each indicator and the steps taken to assure the data (reproduced below).

Systematic review of strengths and weaknesses

The team systematically reviewed the strengths and weaknesses of each data source and the impact on the respective indicators. It collated the findings in a spreadsheet for review by the project leads and for internal audit.

Identified specific quality concerns and implications for the statistics

OSCI identified particular concerns with several administrative data sources, including police recorded crime. It made extensive efforts to understand the quality issues and produced detailed guidance for users about the data and their use in producing the Indices.

Appendix J.3 gives the description of OSCI’s judgment about the police recorded crime data and why it is satisfied that they are sufficiently robust for use in producing the crime domain. It describes the results of external audit of the police force data and resulting concerns about completeness and reliability. It also sets out the steps it took to improve the geographic coding of individual records and the nature of the methods used to produce the crime index that minimise the impact of the data quality issues on the statistics.