OSR statement on statistics around refugees

Published
30 March 2022
In this theme
Population and Society

When talking about refugees, figures related to asylum and resettlement are often quoted. The two are closely related but have some important differences and being clear about what is being quoted can reduce the risk of misunderstandings.

Individuals who are granted asylum, or resettled in the UK have refugee status. To claim asylum in the UK an individual must already be present in the UK. To count in UK resettlement figures, an individual needs to have come to the UK as part of a recognised resettlement scheme and, rather than making a claim for asylum, will already have been recognised as a refugee as part of that scheme. The Home Office user guide for its statistics provides definitions to aid its statistics users, and defines a refugee as ‘someone who has been forced to flee his or her country because of a well-founded fear of persecution for reasons of race, religion, nationality, political opinion or membership in a particular social group.’ The Home Office guide defines asylum to be, ‘the right to be recognized as a refugee and receive legal protection and material assistance.’ The Home Office guide defines resettlement as ‘the transfer of refugees from the country in which they have sought refuge to another State that has agreed to admit them.’

What difference does the definition make to the numbers? 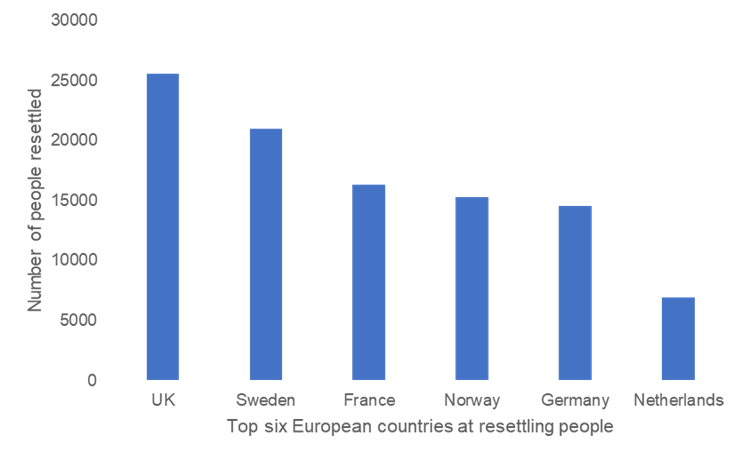 NOTE:  Home Office data were used for the UK. Eurostat data have been used for all other countries.

For the UK, the total number of initial positive asylum decisions between 2015 and 2020 was around 67,000. During this period, Germany granted asylum to over one million people, and Sweden, granted just under 147,000 asylum claims. Figure 2 shows the number of initial positive asylum decisions for the countries shown in Figure 1. 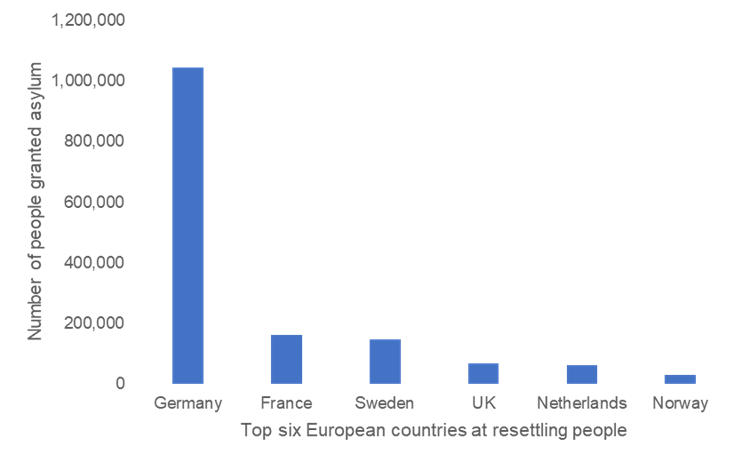 NOTE: Home Office data were used for the UK. Eurostat data have been used for all other countries.

The reasons why people come to a country to claim asylum will be different, and the numbers dependent on a wide range of factors – including border policies and controls, proximity to zones of conflict, prior connections with a country of origin and a range of other factors.

In addition to asylum and resettlement routes, people may be offered protection in other ways. For example, the UK offer to holders of British Nationals (Overseas) passports, mainly in Hong Kong, are included in visa statistics and not the asylum data, although these statistics are cross-referenced in the asylum or protection chapter of the Home Office Immigration statistics. In the UK, recent Ukrainian arrivals will apply through established or new visa schemes and not the regular asylum system. In the EU, Ukrainians may be able to apply for temporary protection status rather than asylum status.

When using any figures, it is important that sufficient context is given to enable appropriate interpretation of the figures being quoted. In this case, it is crucial that it is clear whether figures quoted refer to resettlement or asylum (or the combined total) or some other form of protection, and that the figure quoted is appropriate for the use being made of it.