This case example illustrates basic and enhanced quality assurance across the range of administrative data and other sources with complex data flows, to derive population statistics produced by the Northern Ireland Statistics and Research Agency (NISRA).

It demonstrates an effective approach to managing the assurance of data provided by a group of suppliers including other statistical producers.

Population statistics are an essential part of the Northern Ireland’s statistics infrastructure. They describe the size and structure of its population, illuminate how and why the population is changing, and project how it might change in the future. The statistics play a vital part in planning and inform decision making from national to local level and are a building block in the development of a large number of economic and social statistics.

Population statistics are used by a range of users to understand what the population of Northern Ireland looks like as a whole and at local level, to feed into the development of wider economic and social statistics and to inform decision-making. Population estimates are widely used within central government, as well as being used by local authorities and health bodies, other public bodies, commercial companies and individuals in the private and academic sector: 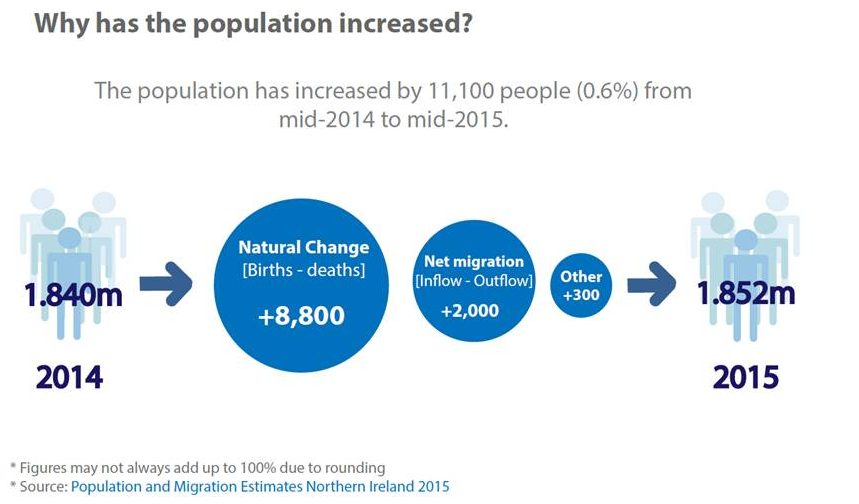 Northern Ireland’s population statistics are based on the latest census data for and take account of the population changes since the census using data from administrative sources covering the components of population change – births, deaths and migration.

The report presents statistics on the population of Northern Ireland by age and sex, as well as statistics on the components of change. It also includes historical information and population densities. NISRA publishes supplementary tables for various other sub-national areas including health districts, former local government districts, education and library boards, electoral wards and neighbourhood renewal areas.

The primary source data and processed data flow between different teams in NISRA, and between NISRA and ONS. The statistics team that produces the population estimates and projections also produces estimates of migration. NISRA, ONS and NRS share data between them on cross-border migration flows.

This figure shows a diagram of the data sources, processing and data flows for the production of population estimates and projections for Northern Ireland: 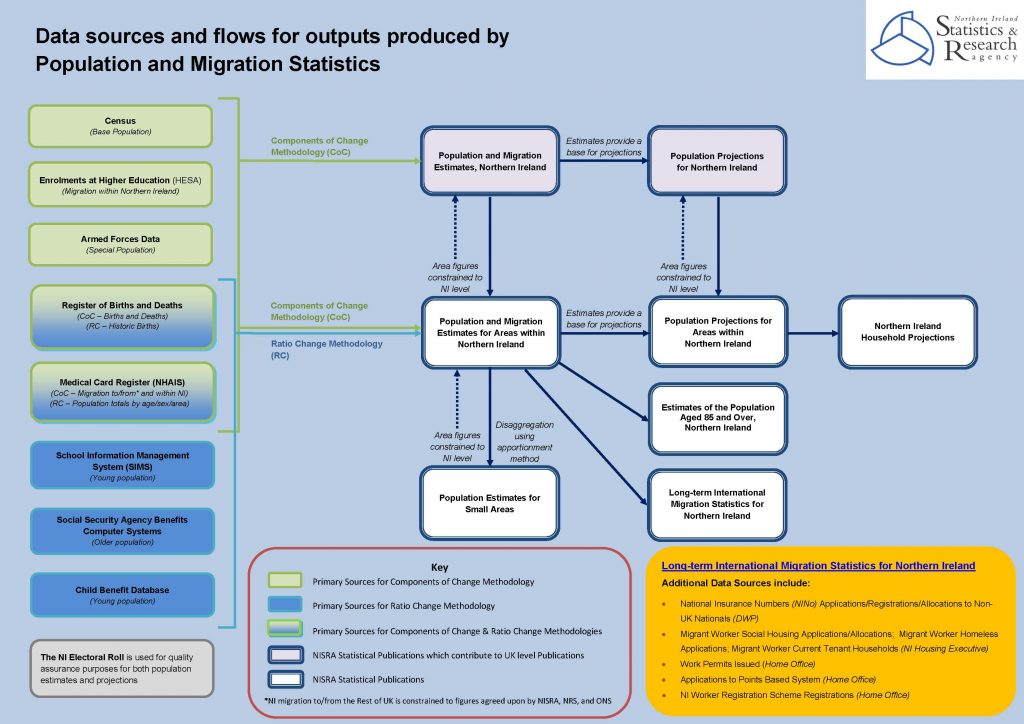 NISRA has compiled a holistic view of the assurance of the data sources used to produce its population estimates and projections statistics. While in the main these are admin data sources, it also includes 2011 Census data.

It provides a clear explanation for each of the QAAD practice areas: operational context and admin data collection; communication with data supply partners; QA undertaken by suppliers; and the producers’ QA.

It also explains the basis for its judgment about the level of assurance undertaken. Each QA description has a summary of the strengths and limitations of the data source with respect to use in producing population statistics and a clear statement about why NISRA has confidence in the data.

For example, it identified the level of assurance for the Child Benefit Database as ‘basic’. There are known deficiencies in these data (eg partial coverage of 16 to 18 year olds). However, the overall risk of data quality concerns is considered to be low, since the data contributes to a sub-set of the population and has tight quality assurance measures during data collection. 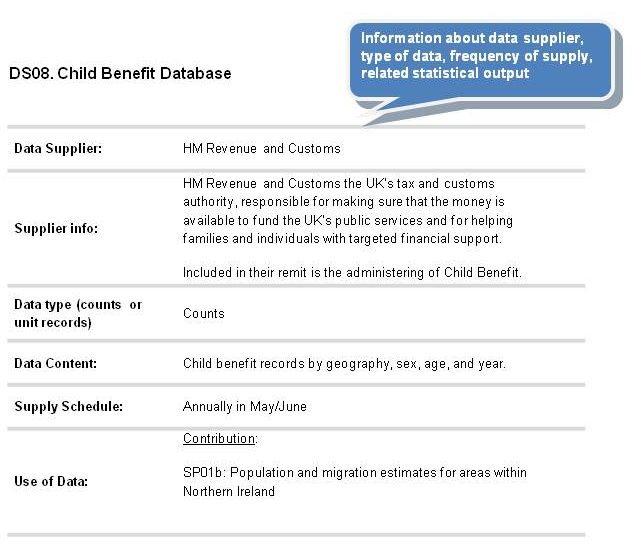 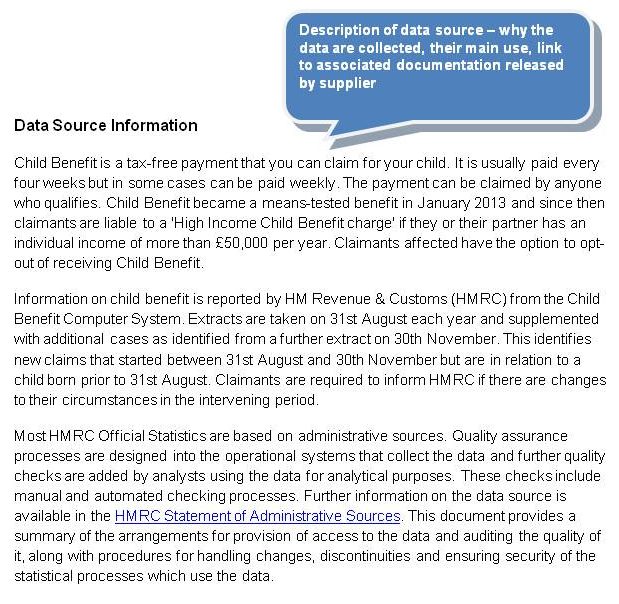 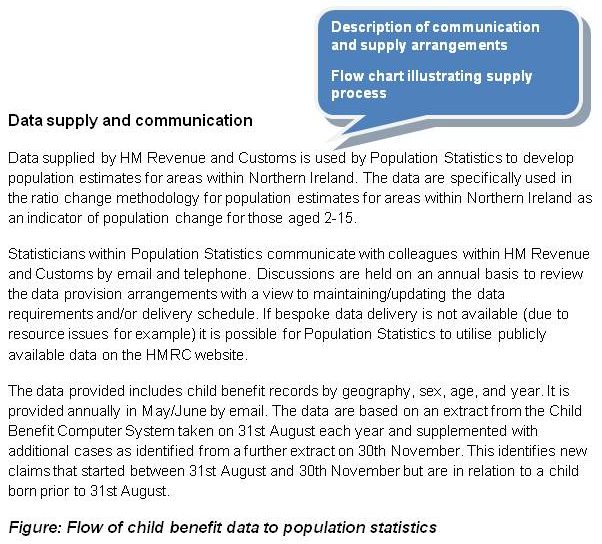 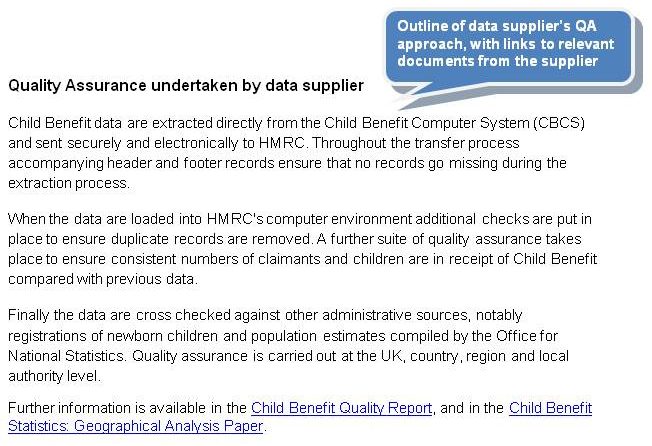 Since the child benefit data are specifically used in the ratio change methodology for population estimates for areas within Northern Ireland as an indicator of population change for those aged 2-15, the risk of quality impacts on the overall estimates is considered to be low.