2. Provision of mental health services and data in Northern Ireland 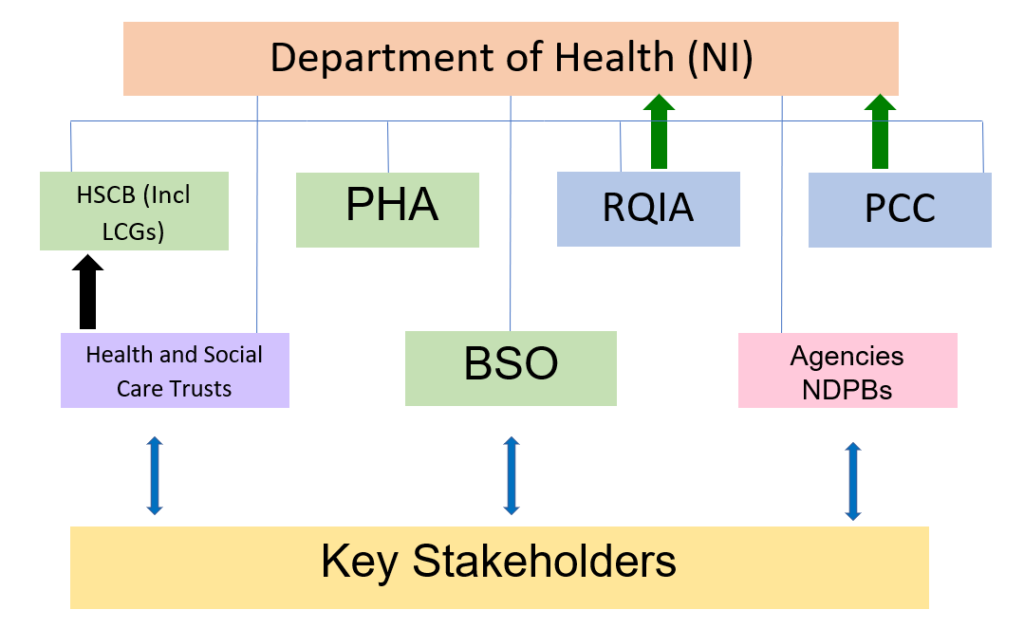 HSCB = Health and Social Care Board

[4] Diagram sourced from Framework Document published in September 2011 by the Department of Health, Social Services and Public Safety

Policy direction in Northern Ireland has shifted over the last 20 years, from delivery of long-term care for mental health patients in hospitals, to community-based services with a focus on patient-centred care to promote health and wellbeing. A review of Mental Health Policies in Northern Ireland was published by Ulster University in June 2019 and provides a helpful summary of how policy has transformed over recent years.

Current mental health policy continues to be shaped and directed by the Bamford Review (2002); an independent review of the law, policy and provision affecting people with mental health needs or a learning disability in Northern Ireland. Recommendations from the review have been taken forward by the NI Executive through two Action Plans (2009-2011 & 2012-2015) with an envisaged timescale of 10-15 years for full implementation.  The review called for a reform of mental health legislation, with the introduction of the Mental Capacity Act (NI) 2016, continued emphasis on the promotion of positive health; a continued shift from hospital to community-based services; development of specialist services and an adequate trained workforce to deliver these services.

In October 2014 the Health and Social Care Board (HSCB), together with the Public Health Agency (PHA), developed and implemented ‘You in Mind’, a regional care delivery pathway to support consistency in service delivery. The pathway used a 5-step care model aimed to match patients’ level of need with an appropriate level of support.  In 2018 a similar pathway was launched for children and young people requiring mental health care and support;  ‘Working Together: A Pathway for Children and Young People through CAMHS’.

The most recent 10-year plan for the delivery of health care services in Northern Ireland; ‘Health and Wellbeing 2026: Delivering Together’ was proposed in 2016 by then Health Minister Michelle O’Neill prior to the collapse of the NI Assembly in 2017. The proposals included a new model of person-centred care focussing on prevention, early intervention and supporting independence and wellbeing. It emphasised services in the community using a more holistic approach. Unfortunately, momentum was lost with the collapse of the NI Assembly and the absence of an Executive has led to a stall in the development and implementation of an up-to-date and relevant mental health strategy, beyond the 2002 Bamford Review.

It is widely reported that the health and social care system in Northern Ireland is under extreme pressure. This was highlighted by the Health Minister Robin Swann, speaking in the Northern Ireland Assembly on 13 April, who stated “The pandemic has highlighted serious, long-established fragility in our health and social care system, especially in staffing capacity. Our health and care system was under immense and growing pressure long before the pandemic. Ten years of financial stringency and short-termism had undoubtedly taken its toll. During the last decade, our health system has been repeatedly documented as being out of date and failing.”

In 2019, the Northern Ireland Affairs Committee inquiry into ‘Health funding in Northern Ireland’ found that mental health, particularly Child and Adolescent Mental Health Services (CAMHS), was a critical area of healthcare that had been subjected to prolonged under-investment. Funding for mental health as a proportion of the health budget in Northern Ireland has remained comparatively low when compared to the rest of the UK. The inquiry reported that ‘in 2015-16, spending on mental health accounted for 5.5 per cent of the overall health budget in NI, in comparison 13 per cent of total expenditure by clinical commissioning groups and specialised commission services was spent on mental health by NHS England in 2015-16. NHS Wales allocated 11.4 per cent of expenditure to mental health in 2017–18 and NHS Scotland allocated 7.6 per cent in 2019–20.’

The inquiry found that those in need of mental health services had struggled to access the same quality of care as those with physical health needs and recommended an increase in the level of investment by the Department of Health (NI) to address this.  The Committee further recognised the need for an up-to-date mental health strategy beyond the Bamford Review to ensure services met the varying needs of service users. They also recognised that urgent action should be taken to reduce suicide rates in Northern Ireland and that the Protect Life 2 strategy should be implemented.

Shortly after the restoration of the NI Assembly in January 2020, an Executive Working Group on Mental Wellbeing, Resilience and Suicide was established. All Ministers are represented on the group with the monitoring and reporting of progress against the Department of Health (NI) actions reviewed every quarter. The group also examines the wider progress of the implementation of Northern Ireland’s suicide prevention strategy; Protect Life 2. The need for a revised and up-to-date mental health strategy has long been awaited – many public bodies, organisations and academics have voiced their concerns, describing mental health issues in NI as an urgent situation.

In May 2020, a Mental Health Action Plan was published by the Department of Health (NI) setting out areas for improvement both in the short and long term. A key action and commitment in the plan was to co-produce a new 10 year Mental Health Strategy.

In June 2021 the Department of Health (NI) published a new 10 year Mental Health Strategy (2021-2031). The strategy aims to improve mental health outcomes for people in Northern Ireland, leading to strategic change and transformation over the next ten years. There are 35 high-level actions within the strategy and we hope that the key findings of our review will support and complement the aims set out in ‘Theme 3: New ways of working’.